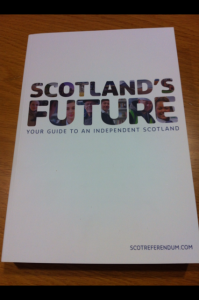 Local Constituency MSPs, Fiona Hyslop (Linlithgow) and Angela Constance (Almond Valley) are urging their constituents to get involved in the referendum debate by reading the Scottish Government’s flagship guide to independence, which was published on Tuesday, November 26, 2013.

The 670-page document – the most comprehensive blueprint for independence ever produced by any country ahead of an independence vote – was launched to an audience of hundreds of journalists from across the globe.

“This landmark document takes the referendum debate into a new phase. The guide and the answers it provides show clearly and simply the difference that we can make in Scotland if decisions on Scotland’s future are taken by those who care most about Scotland – the people who live and work here.”

“The referendum on 18th September next year is a vote unlike any other and it is important to make an informed decision. Scotland’s future is now in Scotland’s hands so I would urge the people of West Lothian to read and discuss this guide, compare it with any alternative future for Scotland and make up your own mind.”