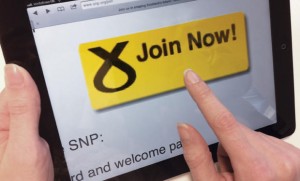 Since the independence referendum on September 18th 2014, membership of the SNP more than doubled in under one week. We now have over 80,000 members making the SNP the third largest party in the UK, overtaking the Liberal Democrats.

If you would like to add your name to that ever increasing list, give our headquaters a call on 0800 633 5432 or drop them an email by clicking HERE.

We look forward to meeting you and working together to build a better future for the people of Scotland.

Find out more at www.snp.org

As SNP membership soars to more than 57,000*, former First Minister Henry McLeish has warned that the Labour Party is in danger of dying out in Scotland.

Henry McLeish has today said that traditional Labour supporters in “solid areas of the old Red Clydeside and in Dundee” have been energised by the referendum debate and are moving towards the SNP. Mr McLeish also called for the Labour Party in Scotland to have full autonomy from the party at UK level.

This criticism from a senior Labour figure only adds to the pressure on Johann Lamont – after the whispering campaign against her leadership continues apace at the Labour Conference in Manchester.

In stark contrast to the Labour party’s fortunes, in recent days the SNP membership has grown by more than 32,000 to stand at more than 57,000 – making the SNP the third largest party in the UK

This follows a Survation poll showing support for the SNP standing at 49 per cent – up on even the 2011 landslide levels – while support for Labour languishes at 33 per cent.

“The extraordinary influx of new members joining the SNP shows no signs of slowing down – with membership now having more than doubled, standing at over 57,000.

“What a contrast with the No campaign parties in the last few days – we have overtaken the Lib Dems at UK level and Labour are in complete disarray in Scotland.

“As the whispering campaign against Johann Lamont continues apace at Labour conference– the warning from Henry McLeish that Labour is in danger of dying out is yet another blow to her floundering leadership.

“But Henry McLeish is absolutely right – Labour’s position in Scotland is growing more precarious by the day as more and more people in traditional Labour heartlands switch to the SNP.

“Labour voters simply won’t forget Johann Lamont’s alliance with the Tories in the No campaign – which is exactly why the SNP is now sitting at 49 per cent in the polls.

“It is clearly the SNP that the people of Scotland trust to stand up for Scotland’s interests – and to hold the Westminster establishment to account on their vow of substantial more powers for Scotland. This new democratic movement in Scotland won’t accept the same old politics as usual from Westminster.”

Henry McLeish warns Labour are in danger of dying out in Scotland unless radical action is taken now: http://www.dailyrecord.co.uk/news/politics/henry-mcleish-warns-labour-danger-4313958
SNP on track for third term: http://www.snp.org/media-centre/news/2014/sep/snp-track-third-term