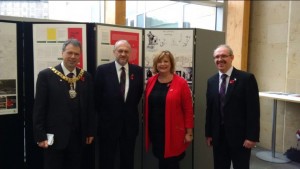 Local Constituency MSP Fiona Hyslop spoke at the unveiling of a memorial to mark the work of Wojtek the Polish Soldier Bear in her capacity as Cabinet Secretary for Culture, Europe and External Affairs.

The event that was organised by the Wojtek Memorial Trust took place on Saturday (7th Nov). Wojtek – dubbed the “Soldier Bear” – was adopted by Polish troops and helped them carry ammunition at the Battle of Monte Cassino. After the war he lived in Scotland at Hutton in Berwickshire, before ending his days in Edinburgh Zoo.

Commenting after the event, Fiona said;

“Wojtek the soldier bear has come to symbolise our strong relationship with Poland and I’m delighted we now have a permanent memorial to Wojtek and his comrades in place in Edinburgh.

“There is a large number of Poles in my constituency and I am pleased that there is a permanent reminder of the significant contribution made by the People and Armed Forces of Poland during the war in defending the freedoms and values we all enjoy today.”