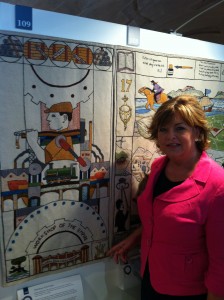 Linlithgow Constituency MSP, Fiona Hyslop (pictured) has welcomed Scotland’s ‘The Great Tapestry’ – one of the world’s longest tapestries – to the Scottish Parliament, paying particular attention to the stitch work completed by people in Linlithgow.

“Hand stitched among railway engineering, shipbuilding and whisky production, sits the famous peak of St Michael’s Spire and the well-recognised impression of Linlithgow’s Black Bitch tied to a tree on the loch’s island.

“This panel of Scotland’s Tapestry created in part by people from Linlithgow is a remarkable portrayal of Workshops of the Empire. Many of these industries were known to carry the legend ‘Made In Scotland’ across the globe.

“I am pleased that Scottish Government body Creative Scotland was able to help fund the creation of this work with £50,000. The entire tapestry is hugely impressive and I would encourage those who can make it in to the Scottish Parliament in September to view this masterpiece celebrating Scotland’s 420 million year history in its entirety.”