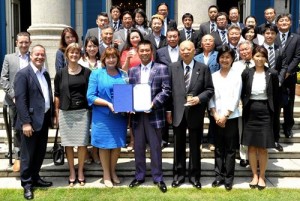 Top Japanese golfer appointed golf ambassador ahead of The Open

One of Japan’s top golfers has been announced as Scotland’s first Goodwill Golf ambassador to Japan ahead of next month’s Open Championship at St Andrews.

The 2014 Japanese Open champion, Yuta Ikeda was appointed by the Cabinet Secretary for Culture, Europe and External Affairs, Fiona Hyslop at a ceremony at the British Embassy in Tokyo earlier this morning.

As a Goodwill Golf Ambassador, Mr Ikeda will represent the Japanese Golf Tour Organisation (JGTO) and fellow Japanese professionals during the competition. He will also be competing in The Open at St Andrews.

“Yuta Ikeda is a talented professional and I wish him the best of luck at St Andrews. As our first goodwill ambassador to Japan, I am sure the reception he will get in Scotland will be a boost ahead of competition. Scotland looks forward to welcoming Yuta, his fellow professionals from the Japanese Golf Tour Organisation and indeed the best players from the rest of the world to Scotland, the Home of Golf, for another memorable Open Championship.”

During the ceremony, which was filmed for Japanese Television, Ms Hyslop presented Mr Ikeda with a tartan jacket by Lochcarron of Scotland for him to wear during his visit to Scotland.

“I am very honoured to have been appointed as the Goodwill Ambassador for Scotland, the birthplace of golf. The 2015 British Open will be held on the St. Andrews Old Course that can be said to symbolize the nature- and history-rich Scotland.

“When I played there in the 2010 Open, I struggled with large greens, pot bunkers, rolling fairways, treacherous roughs, strong winds and sudden rain. It was a truly challenging course. But I would like to do my best in the holy land of golf, as the Goodwill Ambassador for Scotland and as a Japanese player for the success of the 2015 British Open.”

“is a huge honour for us at the JGTO that Mr. Yuta Ikeda, President of the Players Association of JGTO, has been appointed the Goodwill Ambassador for Scotland.

“Mr. Ikeda will play in the 2015 British Open to be held at the St. Andrews in Scotland. Hopefully, he will play a great game as a representative of the Japan Tour players. We at the JGTO look forward to broader and deeper communication between Scotland and Japan through the game of golf.’

With many of the world’s top golfer’s set to take part, The Open is one of the most watched golfing events in the world. It is the oldest of the four Majors and the only one to take place outside of the USA. Seven golfers from the Japanese Golf Tour Organisation are set to play in The Open Championship this July.

The ambassador activity was arranged by Scottish Development International to raise the profile of Scotland’s food and drink, luxury goods and tourism credentials in Japan. It builds on the success of the 2014 Ryder Cup at Gleneagles, which was watched by a global TV audience of an estimated 500million viewers in 183 countries.