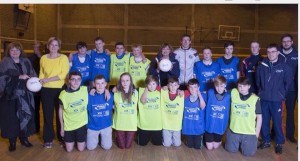 Local Constituency MSP, Fiona Hyslop, Local Councillor Mary Dickson and SNP Westminster Candidate for the Blackburn area, Hannah Bardell attended the Scottish Football Association and the Bank of Scotland’s Midnight League Session at Blackburn Community Centre at the weekend (March 14th) to highlight the work they do for young people in local communities.

“I was delighted to attend the SFA and Bank of Scotland’s Midnight Session in Blackburn, West Lothian, where the first ever Midnight Session was piloted 11 years ago. It has proved such a success it has now been rolled out all over Scotland.

“So much effort has been made by the two organisations to make this possible and it is great to see how much the young people get out of the evening. This is a fantastic initiative and one I am happy to support.

“Hannah Bardell who has a keen interest in football was a real star of the evening coming off the subs bench to score a goal.”

Info:
The BoS Midnight League, which is run in partnership with the Scottish FA, is a national network of diversionary 5-a-side football activity that targets 12-16 year olds across Scotland. The Midnight League has grown substantially over the past eleven years and now around 7,000 young people participate across 100 communities each year. In addition to providing a platform to play football, the Bank of Scotland Midnight League offers participants access to stars of the Scottish game, skills development and engaging activity which grows confidence and ability.